A Magnetic Brake or eddy current brake, also known as an induction brake, electric brake or electric retarder, is a device used to slow or stop a moving object by dissipating its kinetic energy as heat. However, unlike friction brakes, in which the drag force that stops the moving object is provided by friction between two surfaces pressed together, the drag force in an eddy current brake is an electromagnetic force between a magnet and a nearby conductive object in relative motion, due to eddy currents induced in the conductor through electromagnetic induction.

A conductive surface moving past a stationary magnet develops circular electric currents called eddy currents induced in it by the magnetic field, as described by Faraday’s law of induction. By Lenz’s law, the circulating currents create their own magnetic field that opposes the field of the magnet. Thus the moving conductor experiences a drag force from the magnet that opposes its motion, proportional to its velocity. The kinetic energy of the moving object is dissipated as heat generated by the current flowing through the electrical resistance of the conductor.

In an eddy current brake, the magnetic field may be created by a permanent magnet or an electromagnet, so the braking force can be turned on and off or varied by varying the electric current in the electromagnet windings. Another advantage is that since the brake does not work by friction, there are no brake shoe surfaces to wear out, necessitating replacement, as with friction brakes. A disadvantage is that since the braking force is proportional to the relative velocity of the brake, the brake has no holding force when the moving object is stationary, as is provided by static friction in a friction brake, so in vehicles, it must be supplemented by a friction brake.

Eddy current brakes are used to slow high-speed trains and roller coasters, as a compliment for friction brakes in semi-trailer trucks to help prevent brake wear and overheating, to stop powered tools quickly when power is turned off, and in electric meters used by electric utilities.

An eddy current brake consists of a conductive piece of metal, either a straight bar or a disk, which moves through the magnetic field of a magnet, either a permanent magnet or an electromagnet. When it moves past the stationary magnet, the magnet exerts a drag force on the metal which opposes its motion, due to circular electric currents called eddy currents induced in the metal by the magnetic field. Note that the conductive sheet is not made of a ferromagnetic metal such as iron or steel; usually, copper or aluminium are used, which are not attracted to a magnet. The brake does not work by the simple attraction of a ferromagnetic metal to the magnet.

Another way to understand the action is to see that the free charge carriers (electrons) in the metal sheet are moving to the right, so the magnetic field exerts a sideways force on them due to the Lorentz force. Since the velocity v of the charges is to the right and the magnetic field B is directed down, from the right hand rule the Lorentz force on positive charges qv×B is toward the rear in the diagram (to the left when facing in the direction of motion of the sheet) This causes a current I toward the rear under the magnet, which circles around through parts of the sheet outside the magnetic field in two currents, clockwise to the right and counterclockwise to the left, to the front of the magnet again. The mobile charge carriers in the metal, the electrons, actually have a negative charge, so their motion is opposite in direction to the conventional current shown.

Due to Ampere’s circuital law, each of these circular currents creates a counter magnetic field (blue arrows), which due to Lenz’s law opposes the change in a magnetic field, causing a drag force on the sheet which is the braking force exerted by the brake. At the leading edge of the magnet (left side) by the right-hand rule, the counterclockwise current creates a magnetic field pointed up, opposing the magnet’s field, causing a repulsive force between the sheet and the leading edge of the magnet. In contrast, at the trailing edge (right side), the clockwise current causes a magnetic field pointed down, in the same direction as the magnet’s field, creating an attractive force between the sheet and the trailing edge of the magnet. Both of these forces oppose the motion of the sheet. The kinetic energy which is consumed overcoming this drag force is dissipated as heat by the currents flowing through the resistance of the metal, so the metal gets warm under the magnet.

The braking force of an eddy current brake is exactly proportional to the velocity V, so it acts similar to viscous friction in a liquid. The braking force decreases as the velocity decreases. When the conductive sheet is stationary, the magnetic field through each part of it is constant, not changing with time, so no eddy currents are induced, and there is no force between the magnet and the conductor. Thus an eddy current brake has no holding force.

The physical working principle is the same for both.

Disk electromagnetic brakes are used on vehicles such as trains, and power tools such as circular saws, to stop the blade quickly when the power is turned off. A disk eddy current brake consists of a conductive non-ferromagnetic metal disc (rotor) attached to the axle of the vehicle’s wheel, with an electromagnet located with its poles on each side of the disk, so the magnetic field passes through the disk. The electromagnet allows the braking force to be varied. When no current is passed through the electromagnet’s winding, there is no braking force. When the driver steps on the brake pedal, the current is passed through the electromagnet windings, creating a magnetic field, The larger the current in the winding, the larger the eddy currents and the stronger the braking force. Power tool brakes use permanent magnets, which are moved adjacent to the disk by a linkage when the power is turned off. The kinetic energy of the vehicle’s motion is dissipated in Joule heating by the eddy currents passing through the disk’s resistance, so like conventional friction disk brakes, the disk becomes hot. Unlike in the linear brake below, the metal of the disk passes repeatedly through the magnetic field, so disk eddy current brakes get hotter than linear eddy current brakes.

Japanese Shinkansen trains had employed circular eddy current brake system on trailer cars since 100 Series Shinkansen. However, N700 Series Shinkansen abandoned eddy current brakes in favour of regenerative brakes, since 14 of the 16 cars in the trainset used electric motors. In regenerative brakes, the motor that drives the wheel is used as a generator to produce electric current, which can be used to charge a battery, so the energy can be used again. 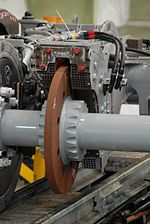 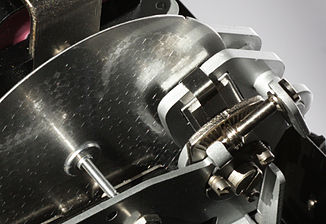